On 5 June 1916, HMS Hampshire left the Royal Navy’s anchorage at Scapa Flow, Orkney, bound for Russia. The Secretary of State for War, Lord Kitchener, was on board as part of a diplomatic and military mission aimed at boosting Russia’s efforts on the Eastern Front.

At about quarter to nine in the evening, in stormy conditions and within two miles of Orkney’s northwest shore, she struck a mine laid by German submarine U-75. Only twelve survived.

The full lists of names of those who were lost on both vessels, along with the list of survivors, are listed on this website.

Go to our Casualties page to see the individual lists.  Further information and updates on progress can be found on our blog:

Any relatives of those who were lost who would like to get in touch, or anyone with any enquiries please email:

Click here for more about the Orkney Heritage Society

The Award honours work which deepens understanding of maritime issues and particularly Britain’s dependence on the sea. 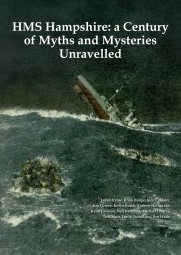 ‘HMS Hampshire: A Century of Myths and Mysteries Unravelled’

To help commemorate the centenary, twelve authors with local knowledge have pooled their expertise to sort fact from fiction with an objective review of the many books, press cuttings and copious unpublished records now available.

“This is a terrific piece of deeply felt work. Buy it, borrow it, steal it if you must, – but read it! The people of the HAMPSHIRE and of Birsay deserve no less.”
Rear Admiral John Burgess, RN, in ‘The Naval Review’.

“Succeeds in its goal admirably, deserves a place on any bookshelf.”
Sigurd Towrie